Women’s Studies in the Community

Working with and for the community is vital to Women’s Studies faculty and students.  Our collaborations both on campus and off campus help empower women and girls and create positive social change.

Our Bread and Roses Center for Feminist Research and Activism is dedicated to promoting community engagement in support of the women's movement.

We partner with the Young Women's Studies Club at Hoover High School. Students can enroll in the General Education “Women in American History” course to participate in a Community Service Learning component with the Hoover YWSC.

Many students do internships with community organizations that work to improve women’s lives.

On campus, we work closely with the Andrea O'Donnell Womyn's Outreach Association (WOA), a feminist resource and activist organization serving the students of SDSU and nearby communities.  For more information, e-mail:  [email protected].

Beginnings of a Women’s Movement 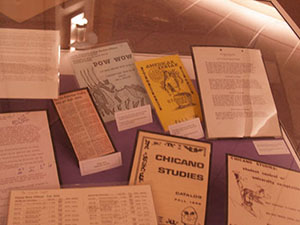 The 1960s and 1970s were years of immense cultural change in the United States. The civil rights, anti-war, lesbian and gay rights, and women's movements were mass displays of social unrest that urged groups of people to join together to protest political and societal injustices within local and national communities. Fierce outcries challenged racism, homophobia, and sexism.

The women's movement of that time was based on the foundation of political and social equality. Working women in the United States challenged the disparities between their wages and those of men. They identified and protested discriminatory hiring practices and policies.   Ubiquitous public forms of sexism betrayed deeply-rooted inequalities in private settings, and women began to question the gender roles enforcing their traditional positions as wives, mothers and homemakers.

The women's movement was often referred to as the Women's Liberation Movement because it was an effort to liberate women from restrictive social expectations and patriarchal norms. In countless aspects of day-to-day life the goal of change was made all the more challenging by entrenched sexism.  Feminists launched multifaceted campaigns to gain mainstream support for their aims and underground newspapers and progressive publications circulated nationwide and chronicled the movement.

Critiques of early feminism have reduced the movement's ideals to burning bras and anti-male sentiments. In actuality, the women's movement offered a rich array of ideals for social improvement, and many women found sisterhood in the community of like-minded activists.

The Birth of the Department 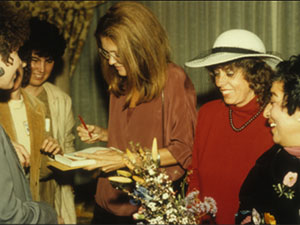 In the late 1960s, the student community of San Diego State University became closely involved in the social movements of that era. New academic departments emerged from the demands of cultural causes: Africana Studies, Chicana and Chicano Studies, and Native American Studies. In the midst of these upheavals, the Women's Studies Program was also born.

In 1969, students from SDSU's Women's Liberation Group, in cooperation with faculty and community members, formed an Ad Hoc Committee for Women's Studies. They collected signatures from over 600 students in support of establishing a Women's Studies Program at SDSU which the university started in of Spring 1970. By the Fall of 1970, SDSU had formally established the first Women's Studies program in the United States which offered 11 courses. In spring of 1974, the Faculty Advisory Committee undertook a nationwide faculty recruitment campaign to strengthen women's studies as a truly academic department.

The demographics of Women's Studies students were diverse from the beginning. Course offerings mirrored the concerns of first-wave feminism. The program publicized classes using colorful flyers that mimicked the grassroots model of raising awareness through local advertisements. These flyers were designed to catch people's eyes and draw them into relevant issues of the time.

Reaching Out to the Community 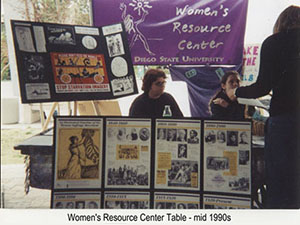 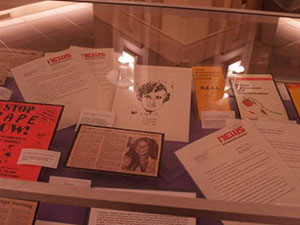 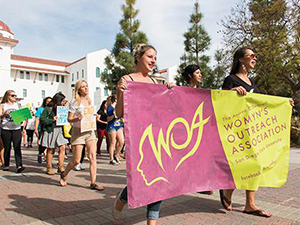 The Center for Women's Studies and Services (C.W.S.S.) opened in 1969 as the first women's center in Southern California. The organizing group behind the CWSS was supportive of women's liberation efforts, and were strongly influenced by feminist ideals. The off-campus location of the CWSS made it a complimentary community organization to the emerging Women's Studies academic department at SDSU until an on-campus center was later opened.

In 1974, the Associated Students granted funding for an on-campus Women's Resource Center (WRC.) The intent of the center was to provide much needed information and assistance to the women of the university community. Riding on the excitement of the Women's Movement, the WRC was deemed successful in its mission. The WRC hosted numerous special events to bring attention to women's issues, including famed speakers and health fairs. However, it was not long before the center felt the strain of the budgetary crisis and faced total closure. In 1977 there was renewed dedication to keeping the WRC open on behalf of the Women's Studies Department and new volunteers. In 2015, the WRC received funding and a permanent space to honor the spirit and dedication of those who fight for a sustained representation of women's voices on campus.

Andrea O'Donnell was a Women's Studies student and the director of the WRC on campus. O'Donnell was strangled by her ex-boyfriend in November of 1994. Her death was a crushing blow to the efforts of a community seeking to prevent that exact crime. The Women's Outreach Association at SDSU has dedicated their student organization to celebrating O'Donnell's work for women, and our community remembers her enthusiasm. Addressing ongoing violence against women will always be an objective for the Women's Studies department at San Diego State. Currently, the Andrea O'Donnell Womyn's Outreach Association—a student run group—works to address the needs of students by hosting events that address women's issues. Take Back the Night is a rally held annually to raise awareness about violence committed against women.

Celebrating Our Past, Looking Towards the Future 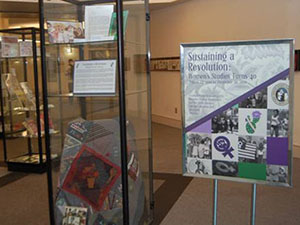 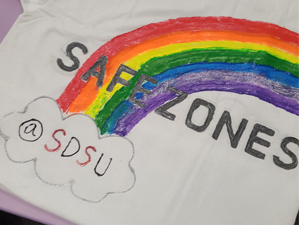 Over the years Women's Studies has hosted many memorable events. For each of our milestone anniversaries we have taken time to commemorate the hard work and success of all the students, faculty, and administrators who have aided in our continued growth as an academic discipline.

As a new department, Women's Studies instituted an annual colloquium series that has continued to the present day. Well-known figures of the women's movement and advocates for women's issues, like Gloria Steinem, Shirley Chisholm, and Bella Abzug, visited SDSU.

In celebration of prominent female figures, the women's groups on campus collaborated to institute the Susan B. Anthony Birthday Celebration. The campus also celebrated Women's Week and International Women's Day. Some of our most memorable photos of past decades are of the "Feminist Follies."

All of our past events and our more recent special occasions are an important facet of the department's relationship with our community supporters and those involved in similar activist pursuits. We will continue to host engagements that increase awareness surrounding issues of gender and sexuality, acknowledge the social change we hope to foster, and celebrate the transformations we have accomplished.

View our timeline to learn more about the history of Women’s Studies at SDSU.

Watch the video from our 50th anniversary celebration.